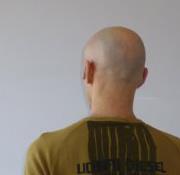 The following can be viewed together with fuller artistic statements at http:// ianflitman.com

A scripted dialogue that generates its own films and allows user interaction to craft scenarios for playback as video. Two men talk about a woman they share, the eponymous Jane. Meaning follows form as the pieces is about the unstable vagaries of human desire. It seeks to extend cinema often while referring to it in the midst of its absurd black box theatre setting. Web and single or two channel installation.

This is a series of films of people listening to the poem ‘The People’ by WB Yeats. Users can choose the number and identity of the listeners, who they listen to, and what background music and sonic atmospherics accompany them. By doing so, it both reflects the central message of the poem and reformulates the film soundtrack itself.

This is a self-editing video diary about the artist moving from London to Istanbul in 2002. A road movie and love story, Hackney Girl reconstitutes the act of watching film into an exercise in pattern recognition as viewers compare differently nuanced versions of the same narrative.

• Flash In The Can Festival, Toronto, Canada, April 2004 (Award-winner in Story and Narrative Category)

• Subject of talk given by invitation to the Interactive Cinema Research Group headed by Glorianna Davenport at MIT in Boston, USA. Sept 23 2003 Recommended reading for two of its courses: • Experiences in Interactive Art • Interactive and Non-Linear Narrative